61. This One Summer by Jillian Tamaki (YA, graphic novel, teen pregnancy, summer)

65. The Arrival of Someday by Jen Malone (YA, fiction, unexpected ending)

69. The Unsung Hero of Birdsong, USA by Brenda Woods (MG)

70. A Very Large Expanse of Sea by Tahereh Mafi (YA but safe for MG, fiction, Muslim girl loves popular boy after 9/11)

71. Pet by Akwaeke Emezi (YA?  Kind of in between.  Dark themes, no sex, some violence)

74. Pride by Ibi Zoboi (YA, fiction, modernization of Pride and Prejudice in NYC)

77. The Next Great Paulie Fink by Ali Benjamin (MG, fiction)

80. To Night Owl From Dogfish by Holly Goldberg Sloan and Meg Wolitzer (MG, fiction, written in letters and emails)

83. We’re Not From Here by Geoff Rodkey (MG, science fiction, humans are aliens)

84. The List of Things that Will Not Change by Rebecca Stead (MG, fiction, gay parents, mental illness)

I did not make my 100 book reading goal, but I read many parts of books, listened to audiobooks and gave up when they didn’t interest me, and actually watched tv.  I enjoyed reading instead of putting pressure on myself.

This year, I stopped writing blog posts.  It’s not that I haven’t been reading- it’s that I was reading so many books at the beginning of the year, I fell behind and decided not to keep up.  I am trying to decide whether to start up again, or leave this blog behind.  I am so busy with teaching right now, I’m not sure starting up again is logical.  If you are a reader who benefits from my random thoughts about books, whether it is for your students or yourself, please let me know and I’ll start up again.

While I am thinking, I will leave you with a list of books I have read during 2019.  I am adding MG for middle grade (good for upper elementary/middle school) or YA for young adult (not appropriate for my students’ age group), as well as PD for professional development (teacher books).  I’m adding a few words to give you an idea of what it’s about.

Tight is about a boy named Bryan who lives in the projects in Brooklyn, New York.  His dad is in and out of jail for fighting and teaches Bryan it is better to be feared than liked.  His mom and dad introduce him to a boy named Mike who seems great at first, but soon pressures Bryan into doing things he doesn’t want to do, but Bryan doesn’t want to be “soft” in front of Mike, so he does them.  Bryan just wants to live drama-free where he can draw and read comics, but Mike wants to go subway surfing and skip school.  Bryan finds himself in a tough position and has to make some tough choices for himself.

What I liked about this book is that I was picturing who I was going to hand it to in my class first.  It has everything that many of my sixth grade boys need- drama, not wanting to look soft or like a snitch, bulling, peer pressure, etc.  What I really appreciated was that there was no talk of drugs, alcohol, sex, or violence with weapons, elements that could push this into more of a YA or mature book.  This was just about a sixth grade boy and common pressures on him, things my own students are dealing with.  Plus, it’s easy reading, and short.  I already have a student to hand this to. 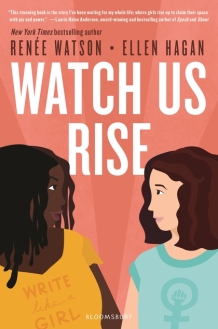 by Renee Watson and Ellen Hagan

In Watch Us Rise, the story bounces between the points of view of Chelsea and Jasmine, high school juniors who attend a progressive high school in NYC, when they discover their school has a lot more progress to make.  Chelsea is white and a strong proponent of women, equality, respecting women’s bodies, and respect.  Jasmine is black and full-figured, and joins Chelsea with these added lenses.  Together, they form a Women’s Rights Club at school and their blog begins to get a lot of attention when they point out the harassment and narrow mindedness coming from several staff members and students.  They post everything from poetry to descriptions of the sexist and racist behaviors they see, but they soon run into opposition from their school and trolls online.  They do not let this deter them from their cause.

What I like about this book is that it teaches young readers about what women go through and gives them examples of young women their own age who are able to make a difference.  Many of the stereotypes pointed out in the book are widely accepted, and this book will educate readers and teach them to keep their eyes open to them.  I also appreciate that it teaches self-love, but the characters are both humanized when they start to question their own beliefs for the sake of romance.

What I don’t like, or didn’t care for as much, was that it seemed like the dialogue was, at times, too staged.  It was like the authors needed the readers to understand a bit of history, so the characters were educating each other.  I also felt that it might go over the heads of some readers who aren’t old enough to appreciate it.

In Blended, Isabella, or Izzie (as her mom calls her), is a sixth grade girl whose mom is white and dad is black.  She isn’t sure about her identity, but is leaning more towards black since her skin isn’t white and her hair isn’t blonde like her mom’s.  Not only is she a “blend” of colors/races, but her parents are divorced and each have a new family, so she is part of a blended family.  Isabella is put in the middle of her parents’ custody disagreement when they start to fight in front of her, and Isabella can’t take it anymore.  To top it all off, someone at school has played a racist prank on one of her best friends, and Isabella is sick of fending off comments about her identity as a mixed race girl.  A major event causes her family members to look deeper at their relationship with Isabella and with each other.

What I liked about this book was that it addresses the issue of being mixed race in today’s climate, which you don’t see much in literature these days, especially children’s literature.  It also addresses the bitterness that can come from divorce, and putting children in the middle of it.  I can already think of at least 3 students in my class who will be able to relate to that aspect of the story, although really, it’s the parents who need to read this book.

What I didn’t like about this book was that the issue of rude comments wasn’t really addressed with one of Isabella’s friends.  I am white, but my children are mixed race, and I am not sure if they will have to address these questions.  I’m not sure they’d be offended by them, but that is my white privilege, not knowing and not fully understanding that perspective. 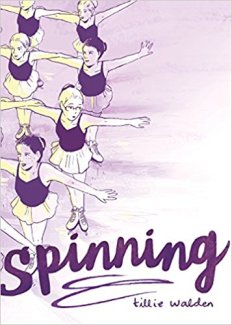 Spinning is a graphic novel memoir about the author, Tillie.  She says her book is about ice skating, but it is really about her youth while ice skating.  Tillie struggled with coming out as gay to her conservative family and friends in Austin, Texas.  She also struggled with a mother who seemed less than supportive and her absent family.  Tillie needed a place to fit, but didn’t feel like she belonged anywhere.  Although she was a successful ice skater, she didn’t enjoy it, and ended up quitting once she started to take control of her life.

What I liked about this book was the emotion Tillie put into her memoir so the reader feels her struggles.  I am not gay, I have never been sexually assaulted, and I have never been pressured in a competitive sport, but the author writes so we can have compassion for Tillie’s experiences.  That is the one thing that people wrote when reviewing this graphic novel- we feel Tillie’s heartbreak, depression, frustration, embarrassment, etc. as we read her words.  Although it is kind of an aside, I also enjoyed learning more about competitive figure skating.

What I didn’t like about this book was the way people were so unaccepting of Tillie when they weren’t in a place to have a say in her life.  I hate when people are bullied and the bullies aren’t punished, or the protagonist isn’t avenged.  However, that’s life.  My bullies are probably still bullying, or basically being awful people to others.  I wanted to see her mother redeem herself or her girlfriend get back into contact with her, or the man who assaulted her- he needed to be caught and punished!  Those things never happened (in the book). 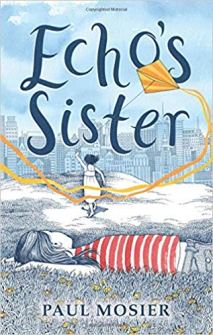 Echo’s Sister‘s name is Laughter, or El, for short.  On El’s first day of seventh grade at a new school, she finds out her younger sister Echo has cancer, and this news devastates her.  She goes through all of the emotions- abandonment, fear, grief, resentment, anger, etc. as Echo goes through chemo and her family learns to deal with the news and reality of cancer.  However, El finds herself surrounded by love and support, but it takes her awhile to realize it.

What I liked about this book was the positivity the characters had, despite the cancer.  It really made me want to go and join a group to support cancer patients, or fundraise for someone who needs the support.  I think that if you aren’t directly affected by cancer, it is something you just won’t think about supporting, but there are so many needs that the families have.  Cancer is honestly my biggest fear, and I hope and pray no one in my family ever has to experience it.  This book gives a perspective that makes me really feel for the families of patients.

What I didn’t like about this book is that it gave me a sore throat, because I kept trying not to cry!  I hate crying.  My throat hurts, my nose is running, and my eyes are still watery.  Plus, I used many tissues.  Ugh too many emotions!  😉