Everything I Never Told You (audiobook)

Everything I Never Told You is kind of heartbreaking, really confusing at times, and a mystery that you will want to unravel.  This story takes place in the 70’s (with flashbacks from the 50’s and 60’s) in a family with a Chinese American father and white mother.   The oldest daughter Lydia dies at the beginning of the novel, and the whole time, we are trying to figure out why as we learn about her very flawed family members, their suspicions and regrets, and her own frustrations with life.  It is told from third person point of view, and the narrator tells the story of each family member.

What I liked about this book is that it was a mystery with a very personal touch.  I usually don’t really care for mysteries, but this was a book with little adventure.  Each character is complex, flawed, and you want to hate them while feeling sorry for them as you feel their pain.  You will definitely make guesses about why and how Lydia died in the lake, and you will be wrong.

What I didn’t like about this book was that it got a little slow at times.  I listened to it as an audiobook, and the reader’s voice can be a little monotone at times.  That is the tone of the book, and it works.  It was just a little tough at times, like when I was driving and tuned it out.  I am still very much looking forward to reading more of Celeste Ng’s work. 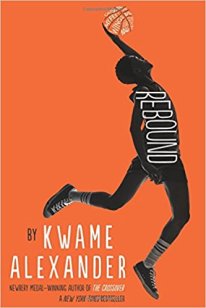 I was so excited for Rebound, the prequel to The Crossover, Alexander’s Newbery-winning book.  I was not disappointed, either.  Rebound isn’t just prequel to the story.  It takes us way back to Josh and JB’s father’s childhood.  Chuck “Da Man” Bell is devastated over the loss of his father to a heart attack.  After a few poor choices, his mother decides to send him to his grandparents’ for the summer, despite his protests.  His grandparents help him to cope with his father’s (their son’s) death, and make peace with his mom.  In the meantime, he spends some time with his cousin, who teaches him to play basketball and do something besides mope and read comic books.  Chuck is  faced with some tough decisions and chooses poorly, but luckily, he rediscovers the importance of family.

What I liked about this book was that I got to spend more time with a family I enjoyed before.  Although they’re two completely different books and not even really a sequel/prequel to each other, it was interesting to read the history of the boys’ father, and see how certain characteristics carried on to the next generation.

What I didn’t like about this book was that I wanted more of it.  I wanted more of the relationship between Chuck and Crystal.  I think I will be truly happy if there’s a book between Rebound and The Crossover.  Are you listening, Kwame? 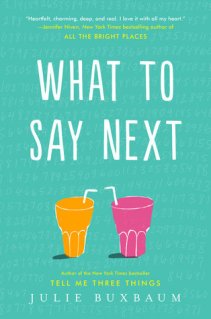 What To Say Next (audiobook)

What to Say Next is what David and Kit don’t have to worry about.  David is an unpopular junior with Aspergers and Kit is one member of a trio of semi-popular girls.  David is nearly invisible and near the top of his class.  Kit recently lost her dad to a car crash, and she finds herself unable to blend back into her group of friends upon returning to school after the funeral.  Instead, she sits with David, and while he is blunt and honest, she appreciates that he doesn’t ignore her obvious pain.  David finds himself in love with Kit, and his sister gives him a makeover to help Kit see him in a new light.  David helps Kit solve a mystery of her father’s death, and that leads to more pain and heartache for both.

What I liked about this book is that it was a quick, easy read.  When in the mood for something fluffy and entertaining, this is the way to go.  I believe it was the same for her first book, Tell Me Three Things.  I liked that it was told from multiple perspectives and that we were able to see into the mind of someone with Aspergers who is fully aware of his Aspergers.

What I didn’t like about this book was how cliche it was.  Popular, meat-head football players, popular snotty girls, etc.  There was an odd love connection, and all worked out in the end.  This is normally the kind of book I wouldn’t pick up, somewhat equivalent to a romance novel for adults.  However, sometimes that’s just what I’m in the mood for. 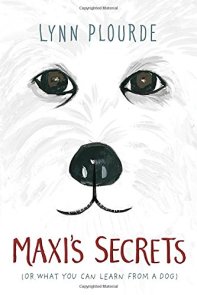 Maxi’s Secrets is about a dog and her boy, Timminy.  Timminy is an unusually short fifth grader who is new in a small town (moved from Portland, Maine).  He starts at a new school where he is immediately bullied for his height.  He, however, makes it worse by not being able to laugh at himself.  He makes friends with a girl who is blind and several of her friends.  Most importantly, Timminy has a best friend named Maxi, a Great Pyrenees puppy, who is wise beyond her years and teaches Timminy her many “secrets” to life.  Each chapter ends with a lesson that Maxi taught Timminy.

What I liked about this book was that it brought in children with disabilities.  One extremely short, one blind, one with a disorder leaving her with crutches, and one who isn’t disabled, but sad due to his mom leaving.  It is good to have diverse characters so readers can gain understanding, compassion, and acceptance.

What I didn’t like about this book was that I didn’t feel it was authentic.  I believe the author really experienced the love and death of her pet dog, but the thinking and interactions of the characters seemed very far removed from the way young people think today.  Not that I know… I’m 38 years old… but I spend my day with 11 and 12 year olds, and I listen to their conversations.  The story was entertaining and I know my dog-loving students will enjoy it, but I’m not positive they’ll be able to relate to it.  I heard a lot about this book on Twitter last year, but I wasn’t as impressed.  I took me 2 weeks to finish, which was a ridiculously long time for the level of difficulty. 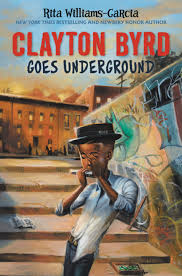 Clayton Byrd Goes Underground follows Clayton, a boy who basically worships his grandfather Cool Papa, a jazz musician and former soldier in the Navy.  Clayton’s mother is not as fond of her father, and reacts coldly and callously when Cool Papa passes.  She has previously unresolved issues with her father, and throws out all of his possessions without considering Clayton’s feelings.  Clayton does not react well, and starts having trouble at school.  The last straw is when his mother takes away his blues harp (harmonica), so Clayton decides to leave home and go underground (ride the subway).  Clayton runs into some boys who are up to no good, and gets caught up in their schemes.  Things do not go well for Clayton, but it is a happy ending for Clayton and his family, so all is well in the end.

What I liked about this book was the way Garcia-Williams approached the subject of death with children.  It is a sensitive topic for children, and there aren’t many books out there to help children through the loss of someone important to them.  This book also showed a child’s perspective of his mother not listening or trying to understand his grief.  I think it would be really helpful for a student who recently lost a grandparent or a close relative to read this book, and perhaps even their parent who might not understand how their child feels.

What I didn’t like about this book was that it was infuriating that his mother was so cold and indifferent to Clayton’s feelings.  I hope that as a mother, I am more sensitive to my kids’ emotions.  As a teacher, I will be aware of reading a group novel that not everyone is interested in, because I felt Clayton had valid feelings about the book he was being forced to read. 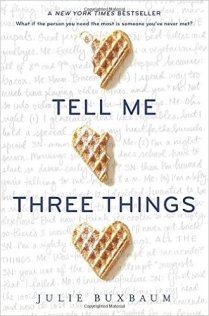 Imagine your mom (your best friend) dying of cancer.  Then your dad remarries someone you’ve never met.  Then he moves you into her fancy home in California, away from your friends and all that is familiar.  Then you have to adapt to a new climate, a new step brother who seems to hate you, a new school, and culture shock.  When you’re on the verge of a breakdown, you start receiving mysterious, but helpful emails from a person named Somebody Nobody, who gives you advice on how to survive at your new school.  Jessie narrows the identity of Somebody Nobody down to 3 people, and the end may surprise you.

What I liked about this book was that the end didn’t surprise me.  I pretty much guessed who it was, and it was who I was rooting for.  This is a cute, romantic story that won’t leave you feeling depressed or angry.  It won’t make you want to throw the book away, and you’ll likely finish it as quickly as I did!

What I didn’t like about this book was that the end didn’t surprise me.  Ha ha… I like and don’t like books that are predictable, depending on my mood.  I didn’t like the idea of being “peened” and the word “peen” to begin with.  That made me feel old and prudish. 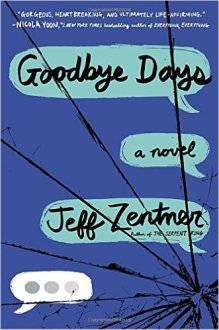 Ugh!  Goodbye Days was depressing!  It was, like Zentner’s first novel (The Serpent King), well written, though.  I am behind in my blogging, and I finished this book several weeks ago, so I apologize for another sucky summary.

Carver is a teenager who lives with the guilt of having killed his best friends.  At least, he believes he did, because he sent the text that caused his friend to crash the car as he was texting back.  Carver goes on several “goodbye days” with the 3 families of his best friends, doing what they would’ve wanted to do on their last days, and giving their families the opportunities to find peace.  However, the father of one of his friends is a big attorney and asks for the police to look into the situation as a possible manslaughter, which would send Carver to jail since he knew his friend would text him back while driving.  This is a heart-wrenching, stressful story that will make you want to put your phone in the trunk while driving just so you’re not tempted to look at it.

What I liked about this book was the way the story unfolded and the anticipation I felt, wondering if Carver would be charged with manslaughter.  I felt for him, and wanted to shake him at the same time.  I think emotionally-charged books get me every time.

What I didn’t like about this book was how depressing it was!  Oh my gosh- even the person reading the book made me want to go to sleep for a long time.  However, if teens read this story, I really hope it hits them that they cannot be using their phones, either because they themselves could die, or they could kill someone else.  If nothing else, that is a great message.